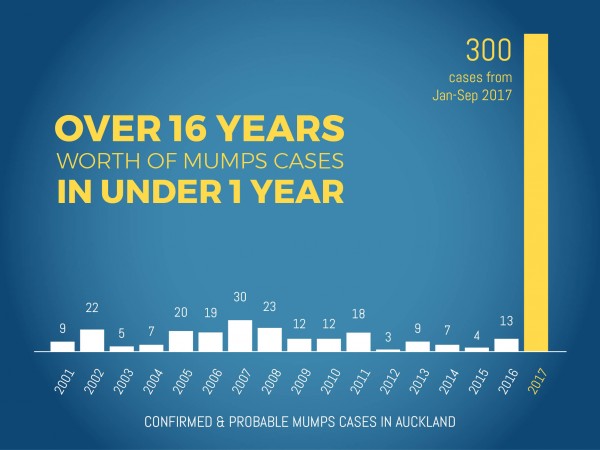 A ‘lost generation’ of young people is facing a triple threat of potentially serious diseases as a result of low immunisation rates in many Auckland communities.

Auckland Regional Public Health Service (ARPHS) warns that the 300 mumps cases in the region since January points to a large number of 10 to 29 year olds who are also at risk of measles and rubella.

Medical Officer of Health Dr Josephine Herman says young people and their whanau need to ensure they have had two doses of the measles, mumps and rubella (MMR) vaccine.

“The implications for young adults are deeply concerning, given the risk of non-immune pregnant women catching rubella. This can result in miscarriage or still birth and babies developing severe birth defects,” says Dr Herman.

Mumps also poses a risk of miscarriage for women who are in their first three months of pregnancy, and in rare cases can cause male sterility.

Measles is an additional threat to communities with low vaccination coverage. “It is likely we’ll see further measles outbreaks in schools similar to those in 2011, 2014 and 2016. The measles virus is highly contagious and can lead to serious medical complications as well,” Dr Herman says.

Parents who are unsure about their family’s MMR vaccinations are being urged to check with their practice nurse or look up their children’s blue Well Child book. This is free for any person who has not received two doses.

This ‘lost generation’ of the unprotected is partly due to the now discredited MMR controversy from 1998 onwards. There is also a pool of adults who may have missed out on receiving the second dose of the MMR vaccine when they were children, as the timing of this dose was moved from 11 years to 4 years in 2001.

According to national immunisation data, the coverage rates in young children up to the age of 12 years are around 80 percent. Today’s mid twenty year olds have even lower rates, with a national coverage survey reporting that only 60 percent of Pakeha children were fully immunised in 1991, with lower rates for Māori (42 percent) and Pacific children (45 percent).

ARPHS has been notified of 300 cases from January 1 to 4 September 2017, with this total greater than all the cases of mumps in the last 16 years.

“Mumps is now at large in the community and the only way we can stop this spreading further is to achieve high levels of MMR vaccination in the population,” says Dr Herman.